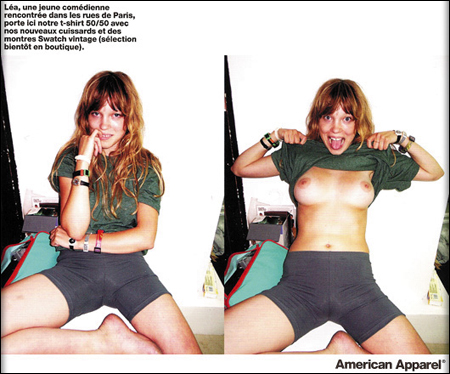 It looks like their website isn’t the only place where American Apparel is showing full frontal nudity. This is an ad from France that comes to us via Blographic via PonyXpress.

It reminds me of an ad that an old buddy of mine tried to get the company to run that’s currently linked to in the comments on That’s Plenty. The version he original pitched the company on was in full color, and I was there in the production room when he printed out the full gloss, 5-6 foot demo poster on their equipment.

Well, they fucking hated it, but they pretty much hated anything if it was him or I who thought it up. I guess we didn’t quite fit the corporate culture. In his case, it probably had to do with being a fanatical follower of Buckminster Fuller. In my case, it probably had to do with how I generally sauntered in around noon (if at all), hung-over, stared at them blankly as though they were all dribbling imbeciles whenever they spoke to me, and could usually only be found up on the roof smoking Parliament cigarettes.

Jesus, I wanted to tell Dov back in those days just how much these sycophantic groupies spent more time stabbing each other than working, but he was all over the place and it was largely impossible to get a word in edgewise with the guy. Those people were totally fucked. If there was something that they couldn’t steal credit for, they’d make sure that it would never get off the ground in the first place. It was like “Well, if I can’t shine, no one can!”

In fact, the most reasonable person on the infamous 5th Floor was the person that Dov disliked the most, and it probably had something to do with les autres incompetents who were in Dov’s good graces disparaging the poor fucker. In any case, last I checked, he’s still there, so I guess he’s managed to survive the pornanas. I know I didn’t, but I wasn’t really trying all that hard…